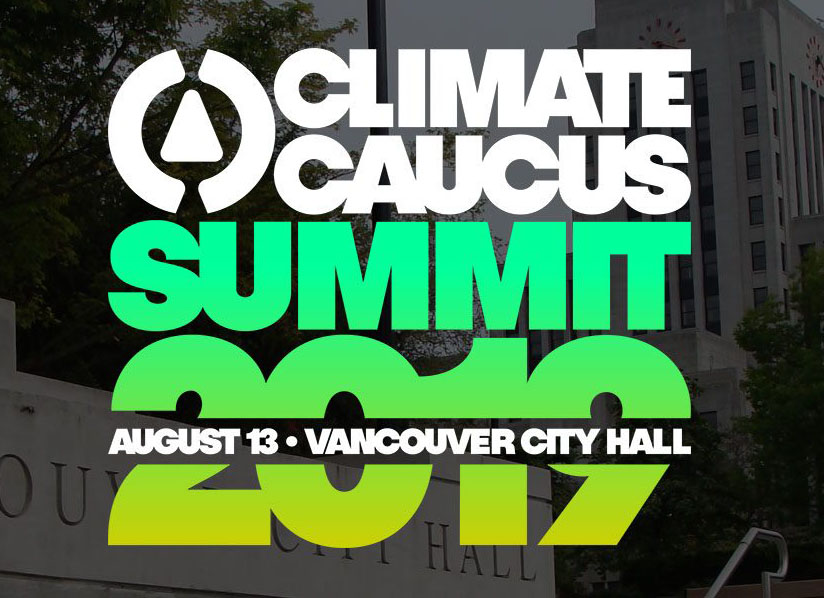 In January 2019, a non-partisan network of Canadian mayors and city councillors established the Climate Caucus to advance municipal climate policy solutions that align with the IPCC’s call to hold global warming below 1.5C. Growing interest in the Climate Caucus was evident this spring, when their event at the FCM 2019 conference overflowed with more attendees than the meeting room could hold. Since then, membership has surged to over 200 municipal representatives.

Rik Logtenberg, the Climate Caucus Chair and a City Councillor in Nelson, BC, said, “We’ve had an enthusiastic response from our members in the caucus—there’s a general sense that we’re all in this together, that as elected officials we can collectively navigate the challenges of climate change through creative, cross-pollination of ideas and resources.”

Members gathered at Vancouver City Hall on On August 13, 2019  for the inaugural Climate Caucus Summit, an event geared toward setting an agenda for six months of national action on climate change. “One of the most important outcomes of the Climate Summit was the focus on meaningful, concrete action. We’re supporting local elected officials to take a more proactive posture in order to respond to the scale of what needs to be done,” said Logtenberg.

Renewable Cities presented on two priorities. Executive Director Alex Boston highlighted the imperative of sustainable land use, integral to effective reductions in transportation and buildings, and central to advancing many local benefits like congestion management, affordability, and health. Sustainable land use was deemed the top priority at the Summit. Renewable Cities Program Manager Kathryn Sheps, in partnership with Sherry Yano of David Suzuki Foundation and Montana Burgess of West Kootenay EcoSociety, presented on the importance of 100% renewable energy commitments, a defining imperative for stabilizing the atmosphere to below 1.5°C and a strategic framework for focusing on local deep GHG reductions.

The Climate Caucus network demonstrates a growing recognition that municipalities are on the front lines of climate impacts and have an essential leadership role in setting local and national low carbon agendas.