Renewable Cities prepared a defensible scenario to illustrate a zero-emission bus transition for B.C. and associated GHG reductions over 20 years, a period slightly longer than the approximate 15-18 year life of a typical bus. Key fleet and fuel assumptions in this transition by a 2040 horizon include: 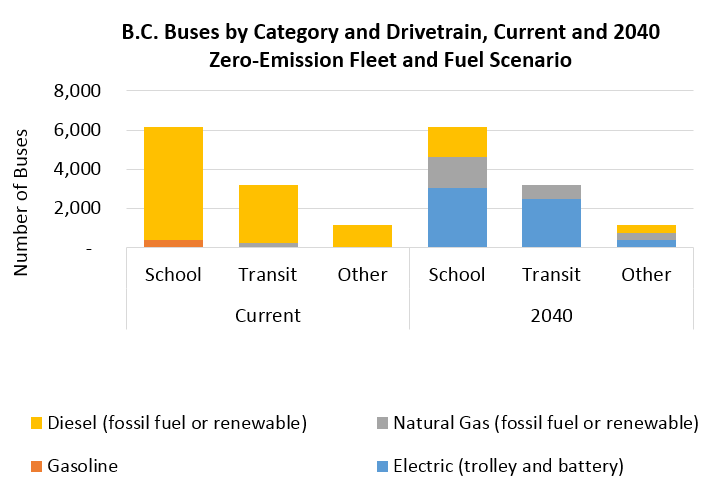 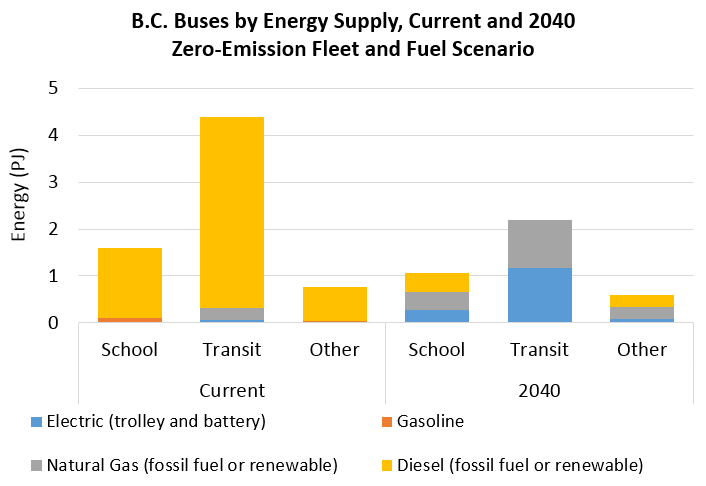 This scenario assumed the total stock of buses and activity profiles remained constant.

According to Natural Resources Canada, BC Transit’s bus stock is 3,228. 40 and 60 per cent of the stock is associated with BC Transit (~1,300 buses) and the Coast Mountain Company (~1,900 buses), respectively. These percentages are estimated from public sources (Wikipedia and the Canadian Public Transit Discussion Board). The fleet average of GHG emissions intensity was assumed to be 1726 CO2e grams of CO2e/km. To obtain the total emissions of 0.305 Mt CO2e from this sector, the annual traveled distance was estimated at 54,742 km using the 1,726 CO2e grams of CO2e/km emissions factor. Given the emissions intensity for renewable CNG and battery electric in Table 1, the total emissions of 95 per cent battery electric and 5% renewable CNG buses for TransLink fleet becomes 0.0065 and 0.0015 Mt CO2e, respectively. Likewise, the total emissions of 50 per cent battery electric and 50 per cent renewable CNG buses for BC Transit’s fleet becomes 0.0027 and 0.0125 Mt CO2e, respectively. Therefore, under this adoption scenario, the total GHG emissions from transit buses in B.C. can be reduced to 0.0232 Mt CO2e, 92 per cent below the current (2015) GHG emissions level.

The GHG emissions of B.C.’s school bus stock is around 0.114 Mt CO2e. The emissions intensity of conventional school buses is 677.4 grams of CO2e/km. It was assumed 50 per cent of school buses would be fully electrified with battery-electric drivetrains. The rest of the stock was assumed to be powered by renewable diesel and renewable CNG, each comprising to 25 per cent of the stock. Therefore, the GHG emissions of the school bus sector is reduced to 0.0247 Mt CO2e.

Natural Resources Canada refers to this sector as “Inter-City” yet it would include diverse charter, tour and other mostly private buses operating over long and short haul distances. The GHG emissions of these buses was assumed to be 970.4 grams of CO2e/km. It was assumed that by 2040, the stock would be split evenly into thirds comprised of renewable diesel (HDRD), renewable compressed natural gas, and battery-electric powered buses. If  the fuel switch only occurs from diesel to HDRD without changing the drivetrain, a 56 per cent GHG emissions reduction could be achieved (see Table 1). The emissions intensity of R100 diesel (HDRD) intercity buses is 426 grams of CO2e/km. The renewable compressed natural gas and battery-electric buses can reduce GHG emissions by 75 and 95 per cent, respectively.

(See the full article that draws upon this analysis here.)