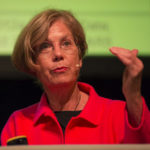 Dr. Seitzinger joins PICS from her position as executive director of the International Geosphere-Biosphere Programme (IGBP) based in Stockholm, Sweden. Prior to that, she was director of the Rutgers/NOAA Cooperative Marine Education and Research Program and visiting professor at Rutgers University in the US. She served as president of the American Society of Limnology and Oceanography from 2006-2010.

Dr. Seitzinger’s work at the IGBP involved facilitating and integrating the work of scientists and researchers across Africa, the Americas, Asia-Pacific and Europe on global environmental change. As a pioneering scientist, her work at Rutgers centred on land-atmosphere-ocean biogeochemistry, with a focus on changes in the global nitrogen cycle and how humans are affecting it.

Dr. Seitzinger holds a PhD in biological oceanography from the University of Rhode Island, is an elected member of the American Academy of Arts and Sciences, and has been awarded an honorary PhD from Utrecht University in the Netherlands. She is highly cited, with more than 130 peer-reviewed publications to her credit.

How Renewable Energy Is Changing Conventional Thinking about Energy for Cities

Ballroom
16:45  -  17:30 at the Ballroom
Manage Cookie Consent
To provide the best experiences, we use technologies like cookies to store and/or access device information. Consenting to these technologies will allow us to process data such as browsing behaviour or unique IDs on this site. Not consenting or withdrawing consent, may adversely affect certain features and functions.
Manage options Manage services Manage vendors Read more about these purposes
View preferences
{title} {title} {title}