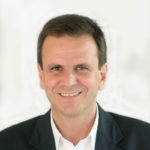 Eduardo Paes has dedicated his entire career to public service, starting in 1993 when he was appointed deputy mayor of the Jacarépaguá and Barra districts in Rio at the age of 23. In 2000, he was appointed Rio´s Municipal Environmental Secretary where he refined his knowledge of environmental issues.

Paes was elected Mayor of Rio de Janeiro and on, October 7th 2012, he was re-elected for a second term. Mayor Paes has led a comprehensive transformation of the city of Rio, addressing many structural challenges. Regarding mobility, he has promoted the largest expansion of mass transportation in the history of the city, with the construction of 152 km of Bus Rapid Transit lines as well as a complete reformulation in urban mobility, adding express corridors and bicycle lanes. Mayor Paes has focused on addressing long-term environmental issues. With sustainable urban development as a priority, the social housing program Morar Carioca benefits the low income communities of Rio de Janeiro and won the Siemens Sustainable Community award in 2013

In 2013, Mayor Paes was elected unanimously as the C40 Climate Leadership Chair following the successful tenure of Mayor Bloomberg of New York City, ending his term with C40 in 2016.

Ballroom
09:00  -  09:45 at the Ballroom
Manage Cookie Consent
To provide the best experiences, we use technologies like cookies to store and/or access device information. Consenting to these technologies will allow us to process data such as browsing behaviour or unique IDs on this site. Not consenting or withdrawing consent, may adversely affect certain features and functions.
Manage options Manage services Manage vendors Read more about these purposes
View preferences
{title} {title} {title}