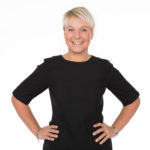 Anna Tenje is the Mayor of the Swedish City of Växjö, which is working to become a fossil fuel free municipality by 2030 and has been called the “greenest city in Europe”, and the Chairman of the Executive Board. As a former member of the Swedish Parliament, Anna Tenje has worked as a committed leader on environmental and climate issues for a number of years. She believes in broad cooperation at many levels and that long-term planning around environmental issues is of key significance for City of Växjö.