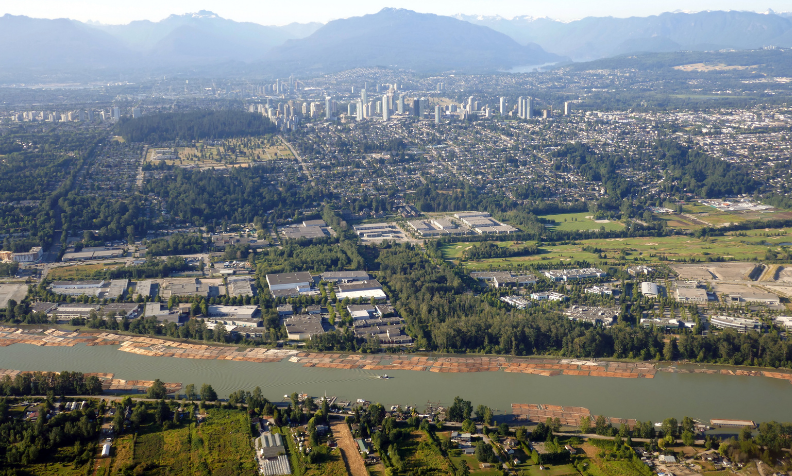 The urgent crises of affordability and climate with the calamitous consequences experienced across B.C. to property, infrastructure, human life, economic activity and ecosystems behove the region to steward a coarse correction. Fortunately, this new direction also offers greater prosperity, including lower congestion and higher industrial and employment land outcomes, and the lowest cost solutions to some of our highest priorities.

While the optimal course of action would be updating the RGS to ensure vision-strategy alignment, this is not currently possible for two reasons: a) these fundamental revisions, which include adoption by all municipal councils in the region, are not possible to achieve before to local government elections this fall (2022), and b) there are underlying policy and governance challenges for local governments to undertake these major course corrections.

Renewable Cities supports a resolution for an early climate and sustainability amendment to Metro 2050 upon appointment of the next Board, after fall 2022 elections. This amendment should be supported by robust analysis to strengthen climate policy, integrate with other critical goals like affordability and reduced congestion, and improve alignment of Metro 2050 strategies with vision and goals.

Land Use is Driving the Largest and Fastest Growing Emission Sector: Transportation

Transportation is the Metro Vancouver’s largest and fastest growing GHG source. A major driver is land use. A disproportionately large share of job and residential growth is further and further from major job hubs (the number one determinant of household carbon and congestion). A large share of general urban fabric is losing density. Average commute distances and times are rising. Transit mode share is slipping. Vehicle growth rates are outstripping population growth.

Fundamentally, a Regional Growth Strategy is a land use plan. A Metro Vancouver staff report on Metro 2050 concludes the overarching land use framework is exactly the same as Metro 2040 which is has been steadily growing the region’s carbon, congestion and affordability crises:

The same parcel-based map data from Metro 2040 has been used to create the Metro 2050 maps meaning no changes have been made to the location of any of the land use designations, the Urban Containment Boundary, the Urban Centres and Frequent Transit Development Areas, or the Special Study Areas. (Metro Vancouver, May 25, 2021)

Land use planning is local governments’ wheelhouse. If there is any planning agenda where Metro Vancouver should align its GHG reduction targets it is Metro 2050. The IPPC underscores the imperative for local leadership and focus.

Effective urban planning can reduce GHG emissions from urban transport between 20% and 50%. (IPCC, Special Report on Global Warming of 1.5°C, 2018)

Focusing growth and investing in transit can globally reduce infrastructure costs 30 per cent and household transportation costs 50 per cent, dramatically reducing GHGs and freeing up scarce capital to be invested in higher value social and economic priorities, as well as additional climate change mitigation measures.

More compact, connected, and coordinated cities are worth up to US$17 trillion in economic savings by 2050. (Global Commission on the Economy & Climate, The New Climate Economy, 2018)

Metro Vancouver Land Use Projections: Policies are Inconsistent with Vision

There is currently 6,500 ha of undeveloped land designated “General Urban” within the Urban Containment Boundary. Metro Vancouver’s basic demographic and planning assumptions include the expectation that these areas will be developed in the next 20 years.

A recent Metro Vancouver analysis on urban tree canopy and impervious surfaces made the following projections regarding land use based on the designations in Metro 2040, which are likewise proposed for Metro 2050:

There are currently about 6,500 hectares of lands with the regional land use designation ‘General Urban’ within the UCB, that are undeveloped or rural and planned for future urban growth… the remaining urban lands within the UCB will be largely developed over the next 15-20 years…. These areas are expected to be developed as mainly low-density housing with some higher density. (Regional Tree Canopy Cover and Impervious Surfaces (Metro Vancouver 2019)

The “undeveloped” 6,500 ha within the UCB, equivalent to 65 km2, is as large as a medium-sized municipality: half the area of the City of Vancouver, one West Van, or four New Westminsters.

This table shows the implications of building out these undeveloped lands within the urban containment boundary, based on conservative extrapolations of similar neighbourhood types and Metro Vancouver analysis.

If this projected growth in General Urban is reallocated to Urban Centres and frequent transit development corridors, vehicle kms travelled and GHG tonnes could be reduced by two-thirds, driving net reductions in GHGs and VKTs and increases in urban tree canopy growth.

The City of Surrey has indicated it will not accept the new Regional Growth Strategy. This is a peculiar twist in Metro 2050’s journey, as it was designed to meet the minimum ambitions across member municipalities. Within Metro Vancouver, Surrey has, in fact, articulated amongst the most ambitious commitments.

Surrey’s Official Community Plan embodies the goal of its Sustainability Charter: “Meeting the needs of the present generation in terms of socio-cultural systems, the economy and the environment, while promoting a high quality of life but without compromising the ability of future generations to meet their own needs.”

Surrey has nine Building Blocks in its Vision “that inform the policies within its OCP and serve as the guide by which the effectiveness of the OCP will be measured and monitored,” specifically: “The City of Surrey will continually become a greener, more complete, more compact and connected community that is resilient, safer, inclusive, healthier and more beautiful.” From urban tree canopy to efficient transportation and land use, to climate impact preparedness and fiscal responsibility, Surrey’s goals are at least as ambitious as Metro 2050.

An overwhelming majority of the Metro Vancouver Board has indicated an intention to reconcile its vision with its strategy early in the next term. We hope that the City of Surrey will join other municipalities in this exercise.

Metro Vancouver can lead a course correction on sustainable land use in the region, providing leadership on strategies that reduce congestion and carbon emissions. Here are six big moves on Sustainable Land Use:

Five Principles to Guide Next Steps

For the Regional Planning Committee’s recommendation to have the best chance of success, the following five principles should guide improvements to Metro 2050.