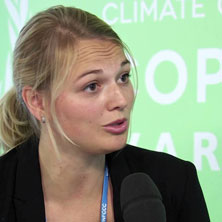 Anna Leidreiter is a Senior Programme Manager at the World Future Council and a key figure in the global campaign for 100% renewable energy. She carries out policy research and develops advocacy campaigns with the Climate, Energy, and Cities team and works on enabling policy frameworks for a global energy transition towards 100% renewable energy.

Anna has gained recognition as a global energy transition expert and has advised governments and groups from Europe to North America to Africa, Asia, and beyond.

At our Global Learning Forum, she led two sessions: “Building citizen and political will for 100% renewable energy: Global learnings from Germany’s energy transition” and “Creating 100% renewable energy laws that are difficult to repeal.” If that didn’t keep her busy, she also took part in our “In Conversation” video series.

“Well, we’ve done a lot of work with Renewable Cities! Specifically, we’ve been trying to conceptualize with cities what it means to implement 100% renewable energy. We created the discussion paper as a first proposal with 12 elements and we want to build on that by holding workshops with various partners to show progress and gaps. [To learn about the discussion paper and criteria, see this website.]

The World Future Council also works on policy frameworks not related just to cities. At the moment, we’re putting our attention on socio-economic benefits of renewable energy and looking at methods to assess it. There’s a patchwork of data available right now—it’s not often broken down on a city level and in many case the issue is just not being monitored. The paper is just in its final stages.

Politicians need help and we’re working with them at many governance levels. They want to convince their own peers that 100% renewable energy is desirable, and for this we’ve come to the conclusion that we need to look more broadly than just 100% RE in cities. We also need to look at the development benefits of this transition. Just one example: Morocco is implementing large-scale concentrated solar power. To achieve the energy transition at speed and scale as well as ensure communities benefiting from it, we would need to complement this with distributed renewable energy generation. The challenge at the moment is to verify that with data to inform the political processes.

Lastly, the World Future Council continued to facilitate the international policy dialogue on renewables. Together with various stakeholders in Tanzania, we are developing policy recommendations on 100% renewable energy to the Government of Tanzania and we’ve launched a new cities program in China, where water is an enormous energy concern. Our next Future of Cities Forum is also on the horizon.”

“On the international policy level, it has been the Paris Agreement as well as the adoption of the Sustainable Development Goals (SDG). SDG number 7 specifically focuses on energy and energy access, which is a big step for the renewables community because it makes the connection to sustainable development. The adoption of the Paris Agreement in fact means that nations are committing to 100% renewables as a long-term goal.

We’ve seen an amazing drop in costs for all [renewable energy] technologies, but particularly solar and wind, which will allow for a decentralized approach over the next few months and years. Therefore I assume the question around centralized versus distributed renewable energy will continuously gain momentum.

I am also excited for electric cars and storage. Developments in these two areas have been a key driver and source of encouragement for the renewable community to keep working. And on the local to national scale, we have such a high number of jobs and diversity of jobs in the renewable energy sector, which really helps to make the case.”

“To ensure that the link made from the SDGs is taken forward and that any enhancement of renewables needs to satisfy them. This is closely related to the decentralized versus centralized debate and the question how we engage new actors in the energy market. On policy, we need to watch governments and the SDGs need to be captured in policy frameworks. You can transition to 100% renewable energy in many different ways, we have realized that it can happen, but how is it done to meet the needs of the people and to reach sustainability?

In Germany, we are seeing a major transformation. The country is transitioning its feed-in tariffs to auctions on the national level and dropping a very successful policy that accelerated local development. This move will clearly strengthen certain utilities and affect others like citizen cooperatives.

Luckily, in Germany, we have great consensus that we need renewables, but the kind of RE system we design and who shares the benefits—all of it is very controversial. Communities are fighting hard, but big utilities are losing market share and are struggling and using political power to control the market; with the new auction/quota, the utilities have won a battle. So how can the community still participate? By excluding local stakeholders, we could slow the energy transition down.”

Related to that, our transition has been focused on electricity, but heating and cooling and transportation are not included. Electrifying the transportation sector can help boost the demand for renewable energy.”