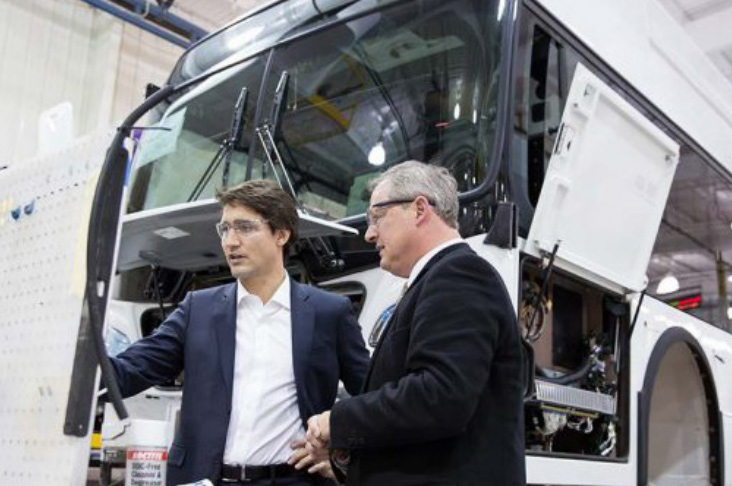 Written by Alex Boston, Executive Director, Renewable Cities. This op-ed originally appeared in the April 9, 2018 edition of the The Hill-Times.

The federal Investing in Canada Plan has noble aims to build “cities of the 21st century.” It is unclear, however, whether program design, even with a thoughtfully motivated climate lens, is sufﬁcient to align investments with its three goals: long term economic growth, GHG management, and inclusive community development.

One of Canada’s biggest and most stubborn GHG sources is personal transportation. Appropriately, one of the biggest infrastructure envelopes is public transit. Just last week the federal government inked a deal with B.C. on the biggest transit infrastructure investment in the province’s history. Fortunately, the B.C. government, every municipality in Metro Vancouver, TransLink—the transit authority—and the federal government share similarly ambitious GHG reduction targets.

Personal transportation GHGs under the $7.5 billion regional transit plan, however, are projected to continue rising out to the Paris Agreement’s 2030 horizon, barely departing from business as usual, according to TransLink’s own diligent analysis.

Metro Vancouver’s large light rail transit investment is similar to transit agendas rolling out across Canada’s biggest urban regions: Edmonton, Calgary,Toronto, Hamilton, Montreal and Ottawa. These gold-plated transit infrastructure plans are built on land use plans that aren’t making it to the podium. For geographical, legislative and political reasons, Metro Vancouver has the most sustainable land use regime of any large urban region in Canada, and we still must do better. Barring any dramatic recent conversion on the road to Paris, there is no indication any of Canada’s major urban region are making the land use course corrections necessary to bend transportation GHG trajectories towards the Paris targets.

High cost, high speed light rail is opening up new suburbs while existing single family neighbourhoods are hollowing out. Never in Canada’s municipal history have single family neighbourhoods been so lightly populated. Over half of single-family homes are now occupied by just one or two people. Most are solo seniors and empty nesters. This share is steadily rising. Many want to downsize but are not attracted to or simply do not have opportunities.

There are immense, untapped opportunities in every Canadian city to revitalize existing single family neighbourhoods and provide a more diverse mix of housing that meets today’s demographic needs. Better transit in existing urban and inner suburban neighbourhoods can intensify corridors and nodes. Gentle intensiﬁcation strategies such as secondary suites and laneway homes can provide extensive affordable housing options. If federal investments in expensive light rail infrastructure were conditional on clear intensiﬁcation requirements, socioeconomic costs would be minimized, and beneﬁts maximized.

Urban expansion extends water, sewage, stormwater and road infrastructure across distant suburbs. This is a major driver of Canada’s unsustainable civic infrastructure deﬁcit. Intensiﬁcation can generate the revenue per household necessary to sustain these costs. Intensifying growth can stem the steady loss of forest carbon and agricultural land consistently reported by NRCan and Stats Can. These natural assets are vital for our resilience in a climate changing world.

According to the Global Commission on the Economy and Climate, focussed growth is among the top strategies for liberating the scarce capital required to achieve the GHG reductions necessary to sustain a healthy global economy. Headed by former World Bank Chief Economist Nicholas Stern and former Mexican President Felipe Calderón, the commission shows how focused growth and transit investment can reduce infrastructure costs 30 per cent and household transportation costs 50 per cent, while dramatically cutting GHGs in the U.S.

California—home to the continent’s biggest congestion and suburbanization challenges—has some of the most innovative solutions. It is the only North American jurisdiction successfully making deep personal transportation GHG reductions. California understands that each leg of the sustainable transportation table, and partnerships among all orders of government around the table, is essential. Decarbonizing fuels (leg one) and improving vehicle efﬁciency (leg two) are senior government responsibilities. Shifting modes to transit and active travel (leg three) and reducing driving distances (leg four) are local government responsibilities. Senior governments must support local implementation with long-term, predictable infrastructure ﬁnancing.

Under the Sustainable Communities Act, California requires all municipalities under a regional government to develop shared, integrated land use and transportation plans. Each plan is subjected to rigorous options analysis that produces a preferred infrastructure and land use path. Plans must demonstrate GHG reduction targets will be met. California EPA approves these plans. State and federal money then ﬂows to local infrastructure priorities.

The Canadian federation is different from California but there are portable lessons. Each order of government has unique leadership responsibilities. Checks and balances must be developed to ensure commitments are met. Large infrastructure projects require diligent options analysis with strong multi-criteria analysis tied to GHG reduction targets. And lastly, Canada’s lofty goals about building more equitable, prosperous, low carbon cities are laudable and achievable. To be successful Team Canada needs a more robust own the podium program.