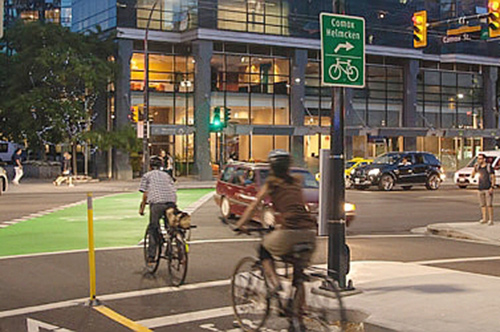 Op-ed: Reaping dividends by putting human health at the forefront

Written by Michael Small, Executive Director, Renewable Cities. This op-ed originally appeared in the November 4, 2015 edition of the Vancouver Sun.

The City of Vancouver made history last March by becoming the first Canadian municipality to pledge to move to 100-per-cent renewable energy. With the release of the Renewable City Strategy, we can see just how the city plans to shift the community’s electricity, heating, and transportation systems away from fossil fuels and toward renewable sources by 2050.

The strategy aims to cut energy use nearly in half while approximately doubling the amount of renewable energy in the city. This municipal goal in itself is already attracting substantial international attention, but a big part of the story is about the potential economic gains and benefits of energy savings for both residents and the city.

At the moment, about 31 per cent of all energy consumed in Vancouver comes from renewable sources, mostly hydro, but also a little biomass, wind, and solar. That means 69 per cent of the energy consumed within city limits is still fossil fuel-based. This petroleum or natural gas is drilled or fracked somewhere else and burnt here every time you step on the accelerator or dial up your thermostat.

The average household in B.C. spends about $3,700 a year on energy, with the lion’s share going to high-carbon transportation and heating fuel. In addition to the global warming impacts, fossil fuels produce local air pollution, such as the nitrogen dioxide and particulate matter emitted from tailpipes, which has real human and financial costs. This pollution leads to increased incidences of lung diseases that burden our strained health care system. In effect, we’re paying others outside the province to provide energy services to us while we pick up the tab for the waste. Why not generate all the clean energy we need here in B.C.?

Vancouver is also quickly growing: At last count, 605,000 residents fell inside the 115 square kilometre borders of the city. In the next 25 years, over 740,000 people will live within that same boundary. With these people and a changing demographic will come new skills and, with a larger population in a constrained space, will come new challenges and opportunities. The key to coping with this change is to harness the power of an increasingly knowledge-based and globally-mobile workforce to answer the city’s call for Renewable City innovation.

Vancouver is enjoying the fruits of a fast growing and resilient economy — unique among Canadian cities it has experienced a greater than three per cent GDP growth rate for each of the last five years and is projected to lead Canadian cities for the next five.

This low-carbon and knowledge-based economy is an oasis of the economic stability in a national economy that continues to be vulnerable to energy price shocks. At last report, Vancouver had 20,000 green jobs in 2013, with a sizable portion employed in green building, energy, energy efficiency, and transportation; they are architects, engineers, construction workers, transit operators, and software coders. By 2020, these green economy workers could constitute up to 10 per cent of all jobs in Vancouver, according to the Vancouver Economic Commission.

The Renewable City Strategy can both help capture local economic benefit for these green collar workers and provide a solution to the growing pains associated with a rising population: new and retrofitted building stock will require know-how and will reduce the need for municipal services, and more transit and car sharing services will require workers and take the load off congested streets. Incidentally, these tools will also save homeowners and commuters substantial sums of money in avoided energy costs over a long period of time while also treading lightly on City finances. Increased demand for renewable energy could also stimulate new markets for local energy generation and the sharing economy — say hello to waste-to-biofuel start-ups and solar energy co-operatives.

The world is hungry for these kind of “Made in Vancouver Climate Solutions”. But we’re at risk of falling behind in attracting capital and skilled workers necessary to maintain our competitive edge in the global green economy. For example, Copenhagen’s Cleantech Cluster is composed of 500 companies and 30,000 employees. Bolstered by strong national and municipal policy, these companies are driving regional economic development in Denmark in green sectors like smart grids, energy efficiency, and wind power. San Francisco’s Bay Area is North America’s leading cleantech hub, led by names like Tesla and the newly Google-acquired Nest.

Thankfully, however, we can be proud of the work put into the Renewable City Strategy. As a model to cities the world over, it will help give us an early mover advantage and bolster the Vancouver brand as a hub of innovation. International markets are craving ideas that reduce pollution and put human health on the forefront. Vancouver’s strategy can help to deliver on that need while paying dividends to locals in the form of energy savings, cleaner air, and green jobs.