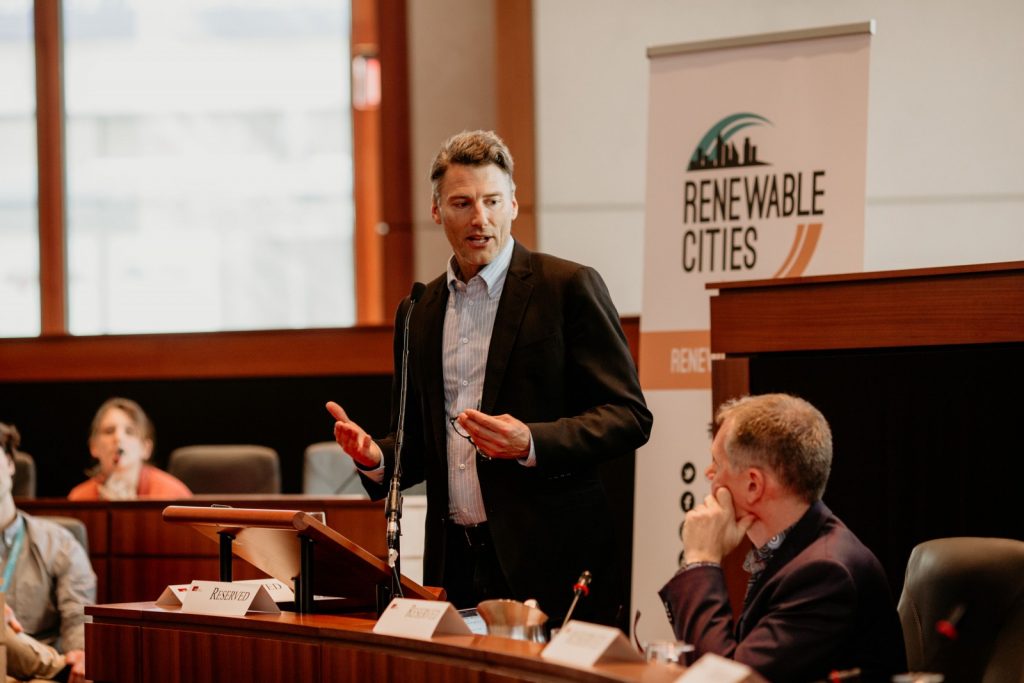 Op-ed: Cities and states can tackle the climate crisis together—here’s how

A climate crisis is upon us and cities are stepping up to tackle it—but they can’t do it without support at state, provincial, and national levels. Mayors are working with all levels of government to forge new partnerships to achieve the speed and scale needed to limit global warming.

Last week, Natural Resources Canada hosted energy ministers from the world’s largest economies in Vancouver at the Clean Energy Ministerial to coordinate and accelerate the development and deployment of climate solutions. Cities were at the table, and hopeful for stronger support.

That’s because the rubber hits the road on most of these solutions in cities, where over 70 percent of the world’s climate pollution is generated.

The Global Covenant of Mayors for Climate & Energy (aka Mayors4Climate) is an historic alliance of over 9,000 global cities. Mayors4Climate met with energy ministers to help craft a new approach for research and investment—Innovate4Cities—so that urban climate action is accelerated.

Many solutions, nevertheless, are already being rapidly deployed by leading jurisdictions around the world. The biggest challenges, in fact, are not technical, they are institutional. They are about the ways national and local governments work together to optimize their unique authority and influence to drive climate action.

Parallel to the Clean Energy Ministerial, Renewable Cities, a program of the SFU Morris J. Wosk Centre for Dialogue, showcased leading local-national government collaborations that are driving deep GHG reductions in homes, at offices, across neighbourhoods, from buses and cars, and around organic bins in alleyways.

Vancouver is an incubator for the type of collaboration we need among different orders of government, utilities, and industry. It’s the birthplace of the B.C. Building “Step Code”, the world’s most innovative energy policy framework for buildings. Beyond the provincial government’s minimum requirements, municipalities can choose higher standards to accelerate design and construction innovation locally, so that by 2032 across the province 100 percent of new buildings are net zero energy. As a result, there is an explosion of new passive buildings and prefabricated building construction in B.C., and, in turn, steadily growing global demand for engineered wood products and B.C. architects and engineers.

This is just one example of mayors working across levels of government to fast-track climate action. There are, nevertheless, governance innovations from around the globe sharing their experience with local, provincial and federal government policy makers, utilities, academics, think tanks, transit authorities, and private sector energy innovators.

Dutch national-local collaboration on electric vehicle charging infrastructure, for example, has created the world’s densest network at dramatically lower costs than other jurisdictions because of collaborative procurement and a recognition that cities know where to deploy charging infrastructure based on their knowledge of local driving behaviour.

Los Angeles Metro’s ambitious zero-emission bus commitment has helped create a regulatory and fiscal environment with the state to phase out air and carbon pollution from transit systems across California. Because of increasingly affordable technologies, and dramatically lower operation and maintenance costs with battery electric buses, the life cycle cost is projected to be lower than conventional diesel buses in less than a decade.

Emerging national, subnational, and local partnerships offer great hope for more affordable housing and transportation along transit corridors and across vast single-family neighbourhoods where populations are plummeting due to aging population and escalating home prices. We must make progress on both affordability and climate action simultaneously.

National climate commitments, state and provincial climate plans, green new deals, and climate emergency responses will all fail unless cities have the resources and stronger collaborative relationships with all levels of government. Now is the time for all of these voices to come together, embrace technological and institutional innovation, and seize new economic opportunity to achieve the systemic urban change we need to tackle the climate crisis.

Alex Boston is executive director of Renewable Cities and a fellow with the SFU Morris J. Wosk Centre for Dialogue. He has served local, provincial, and federal governments and utilities on community climate and energy for 15 years. Gregor Robertson is global ambassador for Mayors4Climate, an alliance of more than 9,000 global cities. Under Robertson’s mayoralty from 2008 to 2018, Vancouver gained global attention for its efforts to become the world’s greenest city and 100 reliant on renewable energy.