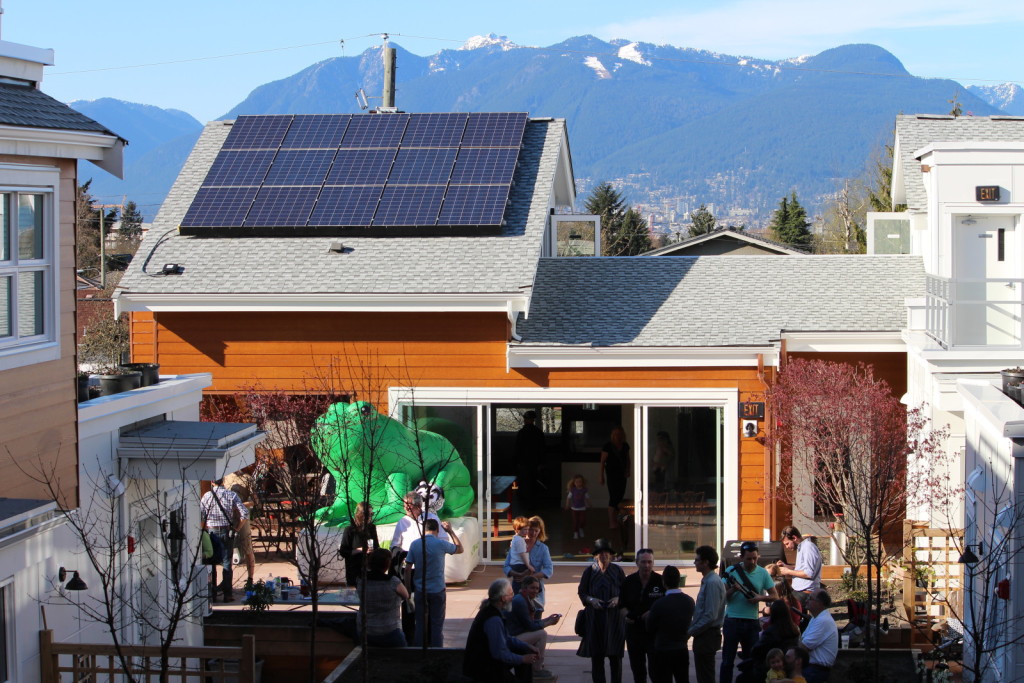 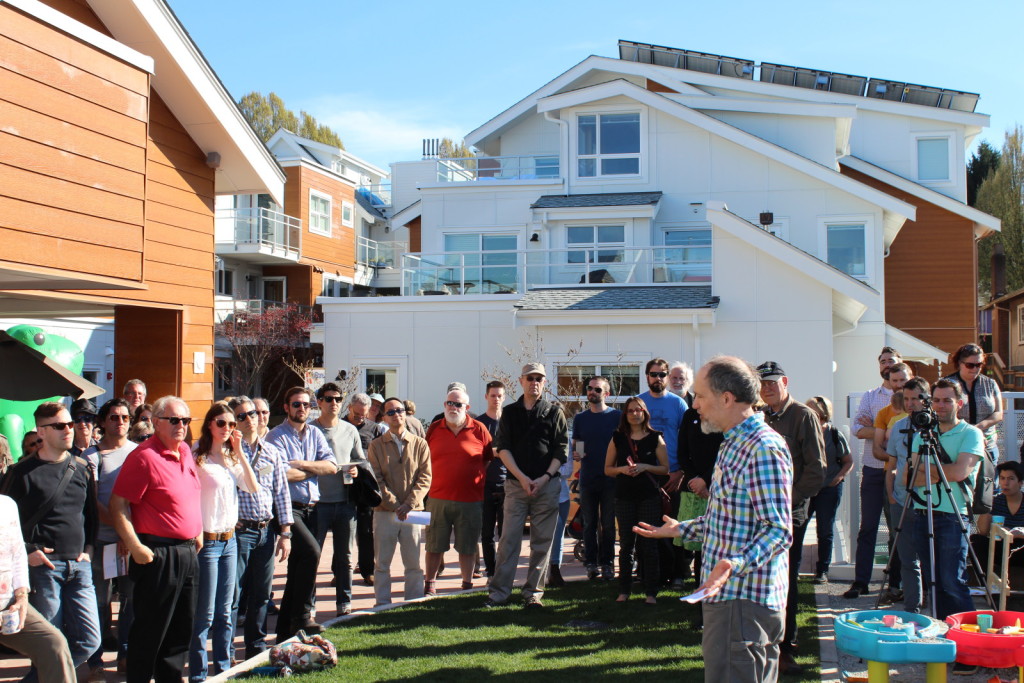 On a bright and sunny day on March 30, 2016, Renewable Cities participated in the public opening of an innovative renewable energy project right in our own backyard—Vancouver Cohousing‘s Community Solar Project in East Vancouver.

The new multi-family residential development is home to a number of firsts in both British Columbia and Canada, and incorporates a number of interesting solar photovoltaic and electric vehicle features. The 31-unit strata spans three double lots and maximizes shared space to reduce energy requirements. This development takes a pioneering approach to addressing the need for low-impact and affordable housing in Vancouver.

At the public opening, Andrea Reimer, Councillor, City of Vancouver and Rob Baxter, Principal, Vancouver Renewable Energy Cooperative made opening remarks. It was noted that while British Columbia and Canada are behind a number of European jurisdictions in terms of introducing solar power and innovative financing systems, BC is well-situated to take advantage of ample solar energy and other renewable resources. They stated that developments such as this one in East Vancouver are needed to help Vancouver realize its Renewable City Strategy.

With its solar electricity and electric vehicle innovations, the Vancouver Cohousing Community Solar Project should help pave the way for other forward-looking developments.

Installed on the rooftop of the complex are 90 Canadian Solar photovoltaic panels that are expected to provide 25,000 kWh of electricity per year. The array is grid-tied, with no on-site storage, and provides electricity to the building’s common areas. The system also takes advantage of BC Hydro’s net metering program; excess energy from the solar electricity system will be fed into the grid and the grid will supply energy when the panels cannot.

Some firsts for the housing development include:

SolShare Energy was responsible for managing the solar component of the development, in partnership with Bullfrog Power. The project was financed with a group of 13 investors who purchased shares in the corporation—they’ll be receiving annual dividends of 3.3% in return for their investment.

The residential building has been designed with electric vehicles (EV) in mind from the beginning and is currently home to two electric cars. One entire solar panel is dedicated just to electric vehicle charging.

Moreover, over 30% of the parking stalls are wired to accommodate Level 2 charging, which will make it easy for residents to use electric cars in the coming years. Residents are hoping to take advantage of the Fraser Basin Council’s new multi-unit residential building (MURB) electric vehicle charging infrastructure incentive. With these features, the building may be the most EV-ready construction in the province.

The building also uses ChargePoint’s new CT 100 charging stations, which are networked chargers that are purpose-built for MURBs. Between these networked stations and the solar array’s smart systems, data on energy production and consumption is available in real time over an internet connection.

For photos from the showcase and tour, see Renewable Cities’ Flickr album. The images are issued under a Creative Commons license and may be used by others with proper attribution to Renewable Cities.