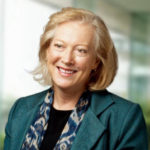 Karen Clarke-Whistler has been the Chief Environment Officer of TD Bank Group since 2008. An environmental scientist, she spent more than 15 years consulting to a diverse base of clients in North and South America, Europe and Africa prior to joining TD.

Karen developed and leads a program that embeds an environmental perspective in TD’s core business strategy and has been instrumental in the bank being recognized as a North American environmental leader and a global climate leader. In 2010 TD became the first North American-based carbon neutral bank and in 2014 the first commercial bank in Canada to issue a green bond. TD is Canada’s only major financial institution that sources 100% of its electricity from renewable sources.

Karen has twice been named one of Canada’s Clean 16 for her “outstanding contribution to clean capitalism.”

Ballroom
13:00  -  13:45 at the Ballroom
Manage Cookie Consent
To provide the best experiences, we use technologies like cookies to store and/or access device information. Consenting to these technologies will allow us to process data such as browsing behaviour or unique IDs on this site. Not consenting or withdrawing consent, may adversely affect certain features and functions.
Manage options Manage services Manage vendors Read more about these purposes
View preferences
{title} {title} {title}