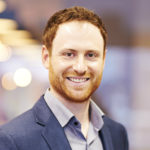 Jonathan Frank is the Director of Projects for CoPower, where he leads the company’s efforts to catalyze clean energy and energy efficiency projects across North America by providing simple, streamlined financing solutions backed by retail Green Bonds. Jonathan has worked in the renewable energy industry for almost a decade and helped bring to life clean energy projects valued at over $300,000,000, including some of Canada’s largest and most innovative rooftop solar projects.

Prior to joining CoPower, Jonathan worked as Director of Business Development with SunEdison, where he developed both distributed and utility solar energy projects as well as energy storage projects. Prior to SunEdison, he held business development and technical sales roles with RESCo Energy, an award-winning solar engineering and construction provider. He is one of the founding executives of Emerging Leaders for Solar Energy (ELSE) and has served as Co-Chair of the National Board of Directors, leading efforts to build charity solar projects in places like remote Nepal and launching a national mentorship program for the Canadian solar industry. He is the 2015 recipient of the Canadian Solar Industries Association’s “GameChanger” Award for Emerging Solar Leader.