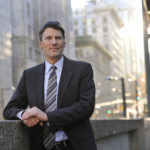 Gregor Robertson was first elected Mayor of Vancouver in November 2008 and was re-elected for his third term in November 2014. Mayor Robertson is a national advocate for urban issues focusing on public infrastructure, housing and transit. Mayor Robertson has led Vancouver’s to be Canada’s fastest growing, greenest and most resilient economy, focused on high-growth sectors like digital media, clean technology, and renewable energy.

Building on the successful legacy of the 2010 Winter Olympics, Mayor Robertson has established Vancouver internationally as the Green Capital—a city where going green is good for business. He has also overseen the creation and implementation of the award-winning Greenest City 2020 Action Plan that aims to make Vancouver an environmental leader in everything from energy efficiency and waste reduction to clean air and local food.

Last fall, Mayor Robertson led Vancouver to be the first major North American city to adopt a plan to be 100% Renewably powered by 2050 or sooner, the latest step toward the goal of becoming the greenest city in the world by 2020.

Ballroom
09:00  -  09:45 at the Ballroom
Manage Cookie Consent
To provide the best experiences, we use technologies like cookies to store and/or access device information. Consenting to these technologies will allow us to process data such as browsing behaviour or unique IDs on this site. Not consenting or withdrawing consent, may adversely affect certain features and functions.
Manage options Manage services Manage vendors Read more about these purposes
View preferences
{title} {title} {title}