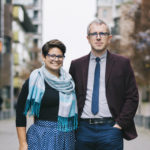 In the summer of 2010, Chris and Melissa Bruntlett, along with their two young children, made the conscious decision to sell the family car, embarking on a new and enlightening adventure. Forced to move to a multi-modal commute, relying on public transit, walking and a lot of cycling, the Bruntletts quickly realized the benefits of living a ‘car-lite’ lifestyle, not the least of which was the increased human interaction with the city they call home. Four years later, Chris and Melissa took their passion further by founding Modacity, a multi-service consultancy that through their work as writers, filmmakers, photographers and speakers inspires “healthier, happier, simpler forms of urban mobility.” Their stories of Vancouver’s emerging bike culture garnered an international audience, and have been featured in publications such as Momentum Magazine, Grist, Spacing Magazine and the Huffington Post.