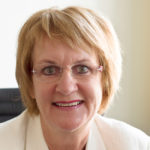 Mrs. Aase Nyegaard was Mayor in Sønderborg 2010-2013 – now she is Deputy Mayor. Sønderborg is a Municipality in southern Denmark with around 75.000 inhabitants. In her civil life, before she became Mayor the first time in Augustenborg 2002-2006, Aase Nyegaard held jobs in the private sector in areas such as sales, counselling and management.

Sønderborg is a frontrunner on climate change when it comes to energy optimization and citizen involvement. The municipality has since 2007 focused on becoming one of Europe’s first CO2-neutral areas. This work is driven by a public-private company, Project Zero, and is of particular attention for its ability to involve widely among citizens, businesses and educational institutions and by involving learning from kindergarten to Ph.D. ProjectZero has won the prestigious prize “Sustainable Energy Europe”. Aase Nyegaard is committee member in ProjectZero.