The UN climate talks held at COP21 in Paris in December, 2015 represented a watershed moment for renewable energy and climate policy.

At COP21, leadership from cities and sub-national governments was on full display and culminated with the Paris City Hall Declaration where nearly 1000 mayors committed to community-wide 100% renewable energy or an 80% carbon reduction by 2050. See the full text of the Declaration at United Cities and Local Governments website.

Leading up to the Paris talks and our event there, our executive director, Michael Small wrote an op-ed, “At the Paris climate talks, cities are a PM’s best friend“, and made the point that national leaders should both expect action from and support cities in implementing ambitious climate and energy targets.

Our team convened a workshop with our partners from the World Future Council and ICLEI at the TAP Pavilion in Paris with a dozen world cities: Dialogue on the Challenges and Best Practices in Setting the 100% Renewable Energy Target

Many city and regional governments have either adopted or are actively exploring a 100% renewable energy (RE) target of some form. The purpose of this dialogue was to examine the challenges that cities and regions are facing in setting a 100% RE target and discussed which policies are yielding the best results. 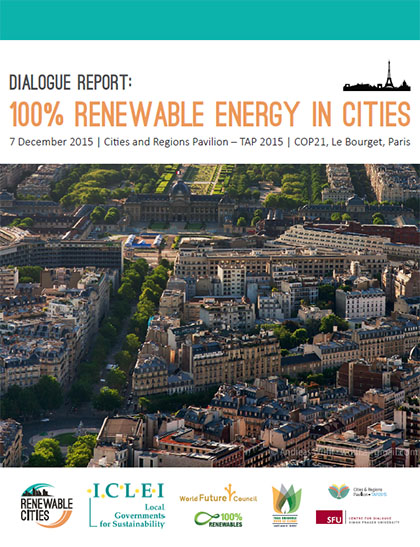 Elected officials and staff from the following governments were represented:

Observers from both China and Japan were also present. Immediately following the dialogue, a panel discussion entitled 100% Renewable Energy Cities and Regions on stage was held. It included senior city elected officials from Africa, Asia, Europe, and North America.