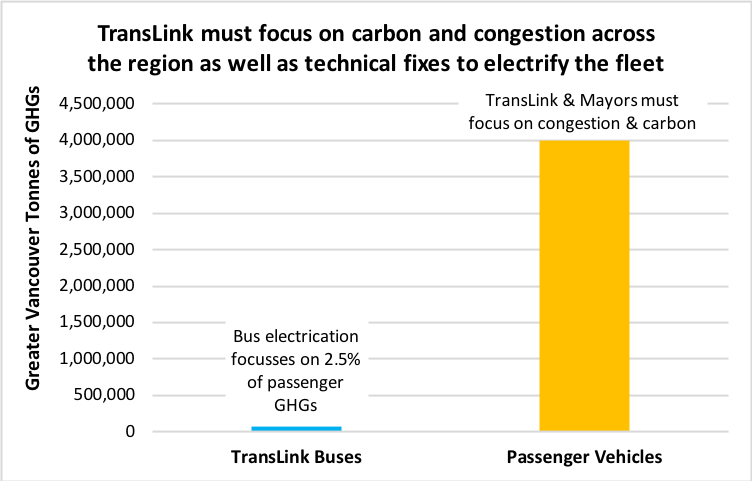 Bus electrification is a good investment, and senior governments should collaborate with TransLink to finance this critical climate action endorsed by TransLink’s Mayors’ Council.

As sales volumes grow, most industry experts project battery electric bus costs will drop more rapidly than TransLink’s conservatively-wise estimates. As fuel costs are dramatically lower, it is expected that by the mid to late 2020s, the full life cycle cost of battery electric buses will be lower than traditional buses.

Transit buses are one of the most strategic and significant heavy-duty sectors to rapidly decarbonize with battery electric drive trains on urban routes and renewable natural gas CNG buses on more suburban and highway routes that are too costly for the necessarily massive batteries. The heavy use of transit buses have a better return on investment than school buses and most commercial buses. And there are only a small handful of players managing the entire stock. In B.C., simply two: TransLink and BC Transit.

TransLink and Mayors’ Council Must Strengthen Transit and Land Use Integration

Last month TransLink and the Mayor’s Council approved in principle the $3.1 billion Surrey Langley SkyTrain project – almost seven times the cost of bus electrification. TransLink estimates the project will cut a mere 17,000 tonnes of carbon dioxide emissions annually. This is under one half of one percent (0.4%) of the region’s four million tonnes of personal transportation GHGs.  This is the equivalent of a rounding error but could in fact be an overestimate as TransLink omitted any consideration of land use dynamics and the project fails to take measures to reduce sprawl outside Surrey’s transit corridors. Growth outside of transit corridors South of the Fraser is the region’s biggest driver of congestion and carbon and the project could, in fact, accelerate rather than slow growth. TransLink’s claim that the project will cut greenhouse gas emissions, congestion and sprawl is not defensible and undermines the transit authority’s credibility.

In its current form, the project is fundamentally at odds with Metro Vancouver’s commitment to cut GHGs 40-60% by 2030 and be zero carbon by 2050.

SkyTrain revenue and ridership is strongly associated with people and jobs close to stations. Surrey Langley SkyTrain—with currently incompatible land use plans—will not generate the revenue to pay for SkyTrain’s operational costs, putting upwards pressure on transit fares and downwards pressure on service expansion. $20 to $40 million dollar stations are being sited in urban forests, open fields and lightly populated neighbourhoods.

In contrast to bus electrification, senior governments should not support Surrey Langley SkyTrain. Transit investment by B.C. and Canada is currently touted as a climate action investment. As planned, this project is not an investment. It is a liability.  Further planning is required to ensure it effectively cuts greenhouse gas emissions, congestion and sprawl, and eliminates the risk of transit fare increases and curtailing service expansion.

Surrey Langley SkyTrain is the greatest opportunity for establishing Surrey City Centre as the region’s second major business district and driving an about face on congestion and carbon growth in Surrey and strengthening local and regional prosperity. Current plans do not support these outcomes. 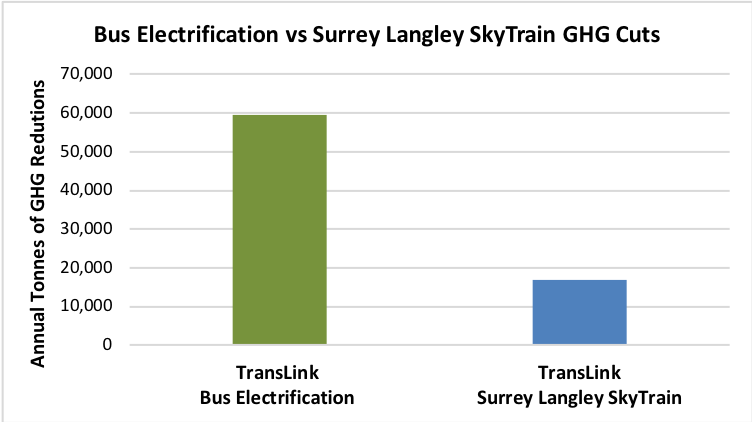 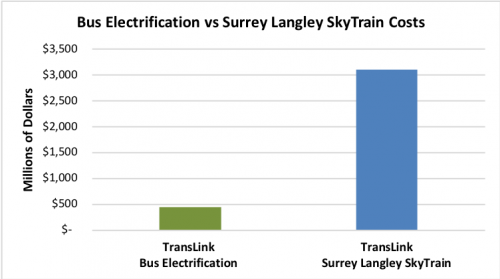 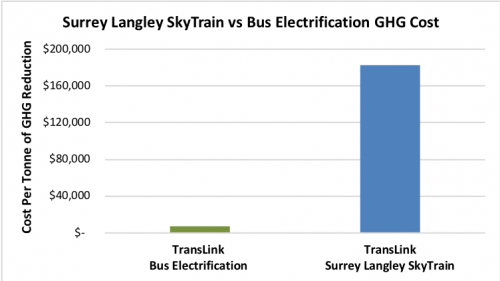 $3.1 billion in transit infrastructure could get the region:

To serve South of Fraser residents and businesses and the entire region Surrey Langley SkyTrain requires better land use in and outside its transit corridors.