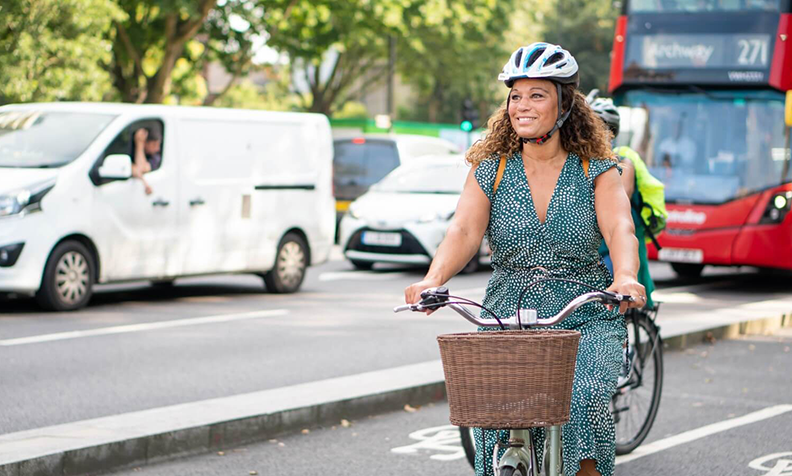 Five ways to reduce our reliance on cars and make us healthier, more connected and climate-friendly.

Last year, Nathan and his wife moved from a Vancouver apartment to a townhouse in South Surrey for a bigger home and more green space. The trade-off was that his commute went from 5 km (30 minutes on the bus) to 40 km (45 minutes driving on the highway). And they had to buy a second car because they both have to drive to do anything more than walk the dog. His household costs also went up — CAA estimates the annual cost of owning an average car at about $13,000. In a country whose cities are dominated by auto-dependent neighbourhoods, his new lifestyle is the norm, and it’s not just a problem for him.

The recent Statistics Canada census report, released on November 30, 2022, showed that despite investments in transit and plans for walkable, transit-oriented growth, almost everyone still drives to work. To hit our B.C. 2030 emission targets, we need to shift things so that at least 30% of us walk, bike or take transit for work and to get around. Commute choices don’t tell the whole story but do indicate that progress is not being made: four out of five British Columbians still drive to work. This really matters because B.C.’s transportation sector is the province’s largest source of greenhouse gas emissions (37 percent of B.C.’s total), and this number is rising. 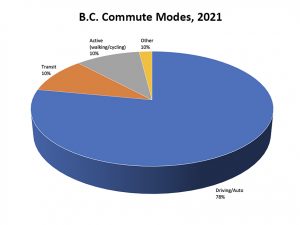 Almost 80 percent of us still drive to get around despite investments in attractive commute methods like transit, walking and biking.

It comes down to making urban growth near transit and major job centres a bigger priority. Local governments continue to greenlight too much growth in far-flung neighbourhoods close to the urban edge. As Nathan and his wife found, driving is necessary because there’s little transit available, and jobs and other amenities are far away.

“In Metro Vancouver, home to half of B.C.’s population, we’ve been successful in growing dense urban centres,” says Renewable Cities’ Senior Planner Peter Whitelaw. “Unfortunately, most growth is still in auto-dependent locations, with more than 15 percent of new homes built close to the city’s edge. That has serious consequences for the climate.” 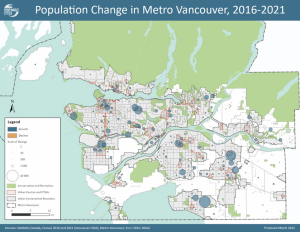 Metro Vancouver met its target of 40% growth in urban centres from 2016 to 2021, but more than 15% of its growth was located right at the edge of the city (blue dots show growth, and larger dots show more growth)

People want attractive transportation choices: they don’t like sitting in traffic, they don’t like the high cost of driving, and they want to contribute to climate solutions. Fortunately, solutions are available to provincial and municipal leaders.

It’s challenging to tease apart the impacts of COVID on the 2021 Census numbers, but we know they are significant. The number of people who worked from home in 2021 more than doubled, from about 10% pre-COVID to 23%. This helped commute times drop from 26 to 22 minutes on average (likely due to less road congestion), so each driving trip produced less GHG emissions. COVID probably spurred more people to drive rather than take transit, but there was little uptake on active transportation modes. Still, in the big picture, emissions from B.C.’s transportation sector continue to rise.

B.C. and local governments must act now to improve British Columbians’ lives and ensure our cities become more climate-friendly for generations to come.

The benefits of strategic urban growth go beyond reducing household costs and harmful emissions. Building cities that are less reliant on driving and offer varied attractive alternatives for getting around leads to improved health, less congestion, and better value for the taxpayer dollar. True, communities have had growth management plans in place for decades, but results have missed targets. Our climate goals are within reach, but to get us to our destination, we need to accelerate our plans and truly commit to implementation.